Effects of Smoking on the Lungs and Body

People expose themselves to a variety of toxins by smoking cigarettes, e-cigs, marijuana, and cigars as well as inhaling external smoke. Others are exposed to secondhand smoke idly at work, out to eat, or at home as they live with someone who smokes. Smoke can develop from burning plastic, wood, and chemicals that can lead to conditions such as lung cancer. No matter what you are smoking, there are dangerous side effects on the body. Lung cancer, strokes, or breathing issues are all potential side effects associated with smoke exposure. The Centers for Disease Control and Prevention (CDC) says that smoking is the most common “preventable cause of death” in the U.S.

Smoking causes 9 out of 10 of all lung cancer deaths. On this page, we will explore the different types of smoke, the varieties of smoking devices, the effects of smoking on the lungs and body as well as treatment options.

What Does Smoking Do to the Body?

Smoking affects every aspect of the body from the central nervous, respiratory, and cardiovascular systems to the hair, skin, and nails. Cigarette smoking harms nearly every organ in the body. Smoke has thousands of harmful chemicals and toxins that permanently alter body parts and can lead to serious conditions. Common side effects of smoking can include mental health issues, breathing issues, an increased heart rate, and much more. 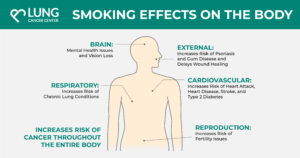 How Does Smoking Affect the Lungs?

Although smoking affects the entire body, smoking has the greatest effect on the respiratory system. Smoking can cause lung disease by damaging your airways and the alveoli found in the lungs. Your body has over 500 million alveoli and smoking kills the cells that line them. However, lung tissues do not grow back, unlike other parts of the body. Additionally, when you smoke, toxins damage lung tissues which become fibrous. Fibrous lung tissues make it more difficult to fully expand your lungs and get enough air, leading to shortness of breath and chronic coughing.

Over time, smoking can lead to increased lung infections as well as a higher risk of conditions such as:

Even those who do not smoke and inhale secondhand smoke from friends and family can have immediate negative effects on the body.

When you inhale smoke, there are immediate, irreversible effects on the body. Whether you are smoking, around someone who smokes, or inhale smoke unintentionally, smoke can find a way to enter the body and make its way to the lungs. Even those representing our country on job sites or during incidents such as 9/11 can inhale asbestos and other dangerous chemical smoke. Once inside your body, smoke and its related toxins can permanently alter body functions such as your mental health, heart rate, and much more. Smoking health risks:

Although smoking can have immediate effects, it also comes with many risks including those that last a lifetime. Smoking has the potential to lead to a shorter life expectancy. Heart and lung issues are often associated with smoking and can lead to strokes, heart attacks, and lung complications like mesothelioma which can influence your life expectancy. More than 16 million Americans live with a smoking-related disease. The long-term effects of smoking include:

How Smoking Affects Your Heart and Blood Vessels

When the body inhales the smoke, blood vessels become damaged, thicker, and narrower. These factors lead to your blood pressure rising, blood clots forming, and blood vessel bursts. Because of this, smoking is a massive risk factor for strokes and coronary heart disease.

Burning plastic gives off toxic fumes and smoke which is not only bad for the environment, but also for the people left to inhale it. Burning plastic in open fields is a primary source of air pollution. Scientists have proven that particle pollution from outdoor smoke and smog can cause lung cancer. This is because when plastic is burned, it releases toxic gases such as dioxins, furans, mercury, and polychlorinated (BCPs).

Plastic smoke contributes to air pollution by releasing black carbon soot. This toxic soot settles on crops and water and can be inhaled or ingested. Plastic smoke increases the risk of conditions like:

Wood smoke contains air pollutants such as benzene, formaldehyde, acrolein, and polycyclic aromatic hydrocarbons (PAHs). Smoke from burning wood is made of gases and fine particles which can be inhaled or ingested. Wood smoke can be common in professions such as outdoor work or even those who are homeless and rely on fire for food and heat. When these fine particles enter your eyes, mouth, or respiratory system, you may experience side effects like burning eyes, runny nose, and more severe illnesses like bronchitis. These particles may also trigger:

There are a wide variety of smoking methods on and off the market. Smoking has the potential to lead to smokers diseases. such as smokers lung, lung cancer, stroke, and mental health side effects. Common methods of smoking include:

Cigarettes are the most commonly used tobacco product in the U.S. and are responsible for the majority of tobacco-related conditions and deaths. Cigarettes are primarily composed of tobacco, over 600 chemical additives, a filter, and paper wrapping. When burned, smokers are exposed to over 7,000 chemicals, many of which are thought to be direct causes of cancer.

Marijuana has many names such as cannabis, weed, and pot. The marijuana drug consists of dried flowers, leaves, stems, and seeds of the cannabis plant. The cannabis plant has over 100 cannabinoids some of which are mind-altering, like THC, and others that do not, like CBD.

Although marijuana is the most used federally illegal drug in the U.S., many states have begun legalizing it. People often smoke marijuana through paraphernalia such as bongs, joints, blunts, pipes, bowls, and even vape pens, which have been linked to lung cancer. Just like many other drugs, marijuana smoke inflames and irritates the lungs. Smoking marijuana regularly could lead to the same adverse health effects as those who smoke cigarettes. Those who smoke marijuana are even viable to developing lung cancer.

Although similar to other tobacco products, cigars are described as a roll of tobacco wrapped in lead tobacco or another tobacco-containing product. The three primary types of cigars sold in the U.S. are large cigars, cigarillos, and small cigars.

Historically, cigar smoking has been associated with older men, however, with the few laws surrounding flavored cigars, younger generations are beginning to use them more. For example, according to the CDC, U.S. cigars were the second most commonly used tobacco product among U.S. middle and high school students in 2022.

Cigars are just as toxic and contain just as many chemicals as cigarettes. Cigars are a primary cause of lung cancer and other serious conditions such as emphysema and chronic bronchitis.

People can accidentally inhale toxic chemicals through gases, dust, and smoke as a result of a chemical reaction through heating, reactions, or explosions. An especially toxic group of chemicals are VOCs, Volatile Organic Compounds. VOCs can be found in the home in objects such as carpets, paints, varnishes, caulks, and upholstered furniture. The side effects of inhaling toxins can develop quickly or lead to long-term effects.

The long-term effects of smoking include:

Across the world, some coaches and groups provide counseling for smokers. These counselors can help you create a plan to quit smoking as well as provide support for stress and withdrawal. For smokers that do not use tobacco, therapy is an excellent option to discuss how to quit.

To help manage withdrawal symptoms and cravings, medication can help. There are many over-the-counter medications such as patches, gum, and lozenges that help combat side effects. Additionally, there are prescription forms of Nicotine Replace Therapy (NRT) inhalers, nasal sprays, varenicline, and bupropion to weaken withdrawal symptoms.

Get Your Lung Cancer Case Evaluation

If you have more questions about how smoking may affect your health or you have been diagnosed with a smoking-related disease like lung cancer, Lung Cancer Center has the resources to help. Receive your free case evaluation to determine if you are eligible for a lung cancer settlement.