Radiation therapy consists of internal and external high-energy X-rays that can kill cancer cells or shrink them, and prevent the spread, or metastasis, of lung cancer.

What Is Radiation Therapy?

Lung Cancer Radiation Therapy Treatment, also known as radiotherapy, uses high-energy X-rays to kill cancer cells and prevent the spread of tumors. There are several types of lung cancer radiation treatment techniques employed depending on the type and stage of cancer – specifically, the size and location of the tumor(s). Primarily, the two main types of radiation therapy are external radiation (focused beams of radiation from outside the body) and internal radiation (radiation projected from inside the body). In most cases, either type of radiation for lung cancer treatment is used:

Unfortunately, lung cancer diagnoses have some of the highest mortality rates among all groups of diagnosed cancers. Often, patients are diagnosed with lung cancer around stage 4 – an incurable stage of the disease.

Typically, stage 4 cancer involves pain and bleeding or blocked airways from tumor growth. As such, radiation therapy prescribed to patients with stage 4 cancer is done generally for palliative purposes.

Radiation can eliminate or shrink painful tumors in the chest or bones, or those obstructing breathing canals. 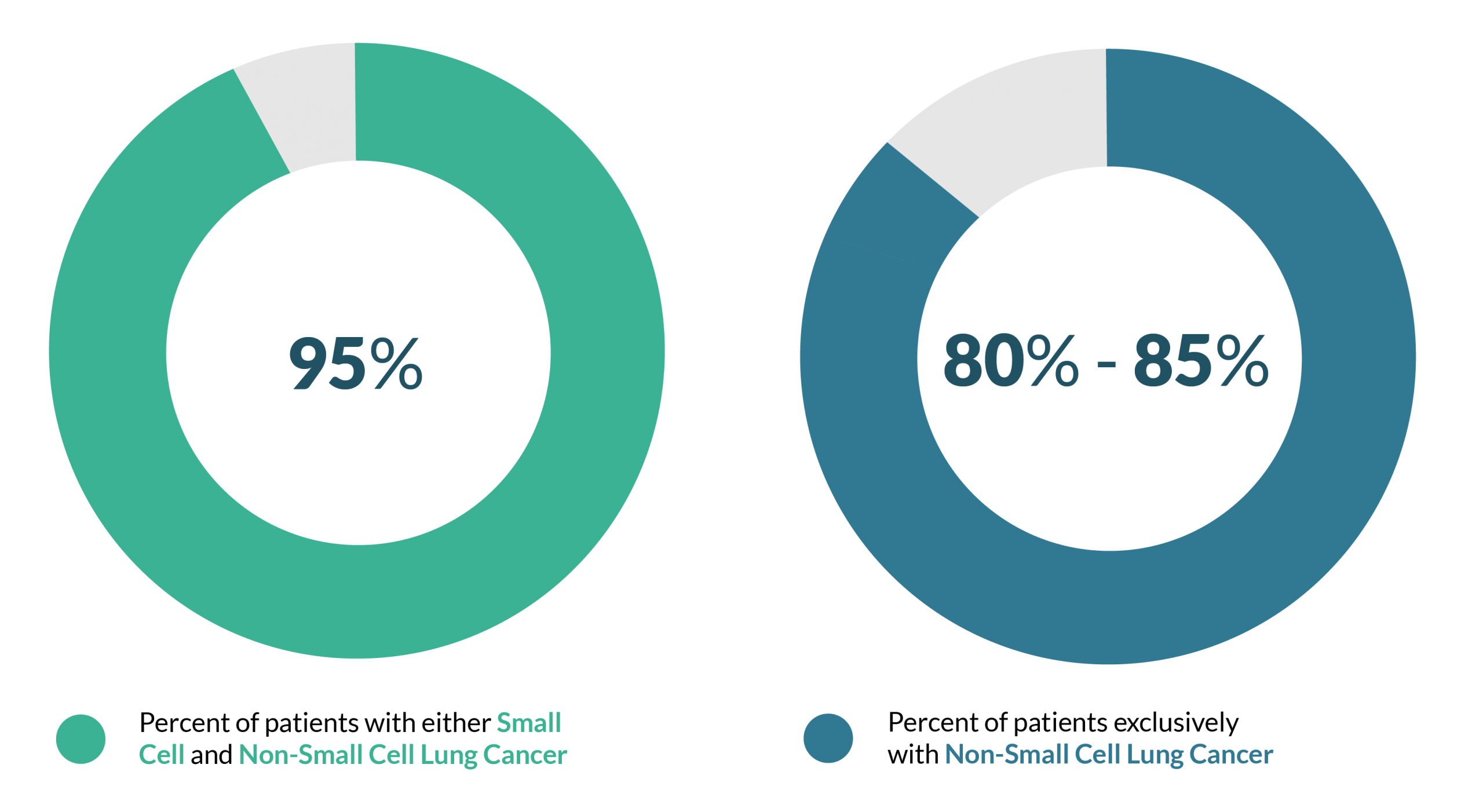 Can Lung Cancer be Treated With Radiation?

Below is a table of current, common radiation therapy techniques used to treat lung cancer – either as a primary or secondary treatment.

For the most part, small cell lung cancer (SCLC) is the rarer and more aggressive type of lung cancer. Subsequently, the use of radiation therapy, as determined by a doctor, will depend on cancer’s stage and can require internal radiation therapy. Commonly referred to as “limited-stage”, or SCLC limited to the chest, this form may be treated once or twice per day with a combination of chemotherapy and radiation therapy between three and seven weeks.

Extensive-stage SCLC indicates a spread beyond the chest and, as such, chemotherapy may become the primary course of treatment. Nonetheless, radiation can be used in palliative therapy to alleviate symptoms caused by tumors such as headaches, pain, and feelings of weakness. Often, with prognoses like these, treatment requires five visits per week for two to three weeks. Preventative cranial radiation (PCR) may also be used at this time to increase survival time and relieve painful symptoms in SCLC patients who are responsive to chemotherapy with or without radiotherapy.

Early-stage NSCLC is sometimes treated with stereotactic body radiation therapy (SBRT). Generally, treatment is administered five days a week for about seven weeks. Ultimately, the length and frequency of treatment are decided by the individual’s care team. Similarly, radiation therapy is recommended for advanced-stage NSCLC spread to the lymph nodes but still in the chest that cannot be treated with surgery. Five treatments per day, alongside chemotherapy, may be administered for up to six weeks. Even for those who have had their chest tumors removed by surgery, radiation therapy may be given to patients with advanced-stage NSCLC.

Before undergoing treatment, patients should speak with their doctor about medical and holistic options to reduce the painful side effects of radiation therapy. For instance, for patients assigned radiation therapy to the chest, swallowing may become difficult.

Patients and families can plan ahead by stocking up on liquids and soft foods. For those who need cranial radiation, memory loss and problems thinking normally may prevent the patient from feeling her best. Before therapy, patients and their loved ones should discuss ways to ask for and give help during this time.

Who is Eligible for Lung Cancer Radiation Treatment?

For patients with stage 1 NSCLC with a tumor in the chest measuring five centimeters or less, radiation therapy can be between 85 and 95 percent effective as surgery for the same prognosis. Furthermore, a trial of combination chemoradiation therapy resulted in a 32 percent five-year survival rate for patients with NSCLC – double previous estimates.

For the most part, radiation treatments are administered in an outpatient setting as determined by a radiation oncologist. Patients will attend appointments a set number of days each week for treatment but have the ability to return home at the end of each day. Accordingly, patients should seize the opportunity to plan for plenty of rest and food, as this can also help improve the prognosis. Sleep and calories can feel restorative during cancer therapy and help maintain the patient’s health throughout treatment.