Chemotherapy for the treatment of lung cancer refers to therapy processes and medications that kill cancer cells, including cisplatin, carboplatin, vinorelbine, and pemetrexed.

In the medical community, chemotherapy is defined as any chemical substance(s) used to treat a disease. Among the general population, however, chemotherapy refers to treatment therapy medications that kill cancer cells (also known as cytotoxic medicine). Especially in the treatment of lung cancer, there are multiple treatment medications and modalities capable of shrinking or killing tumors – chemotherapy is merely one route. It can be administered once intravenously (IV) with heated medications or in cycles with multiple doses. Moreover, this form of lung cancer treatment may be used alone or as a part of a combination of other primary therapies like surgery.

Generally, the primary goals of administering chemotherapy are to cure or control the spread (i.e. metastasis) of tumors. If neither is possible due to an advanced stage of lung cancer, palliation (or, palliative chemotherapy) may be prescribed to improve the patient’s quality of life and reduce painful symptoms. Based on the individual’s stage of lung cancer and the prognosis, doctors may use chemotherapy as a primary, curative treatment, or before or after other cancer therapies such as surgery and radiation.

Get the Help You Need

The most common reasons oncologists consider chemotherapy include:

Is Chemotherapy a Cure for Lung Cancer?

When discussing chemotherapy as a lung cancer treatment option, doctors often use words like primary or secondary, first or second line, and durable response. These terms may be confusing as patients wonder what, if any, of their treatment options might be a cure for the disease. In reality, lung cancer has the highest mortality rate of all cancer diagnoses because most lung cancers are diagnosed during advanced stages. However, there are steps a patient can take to help improve their prognosis. 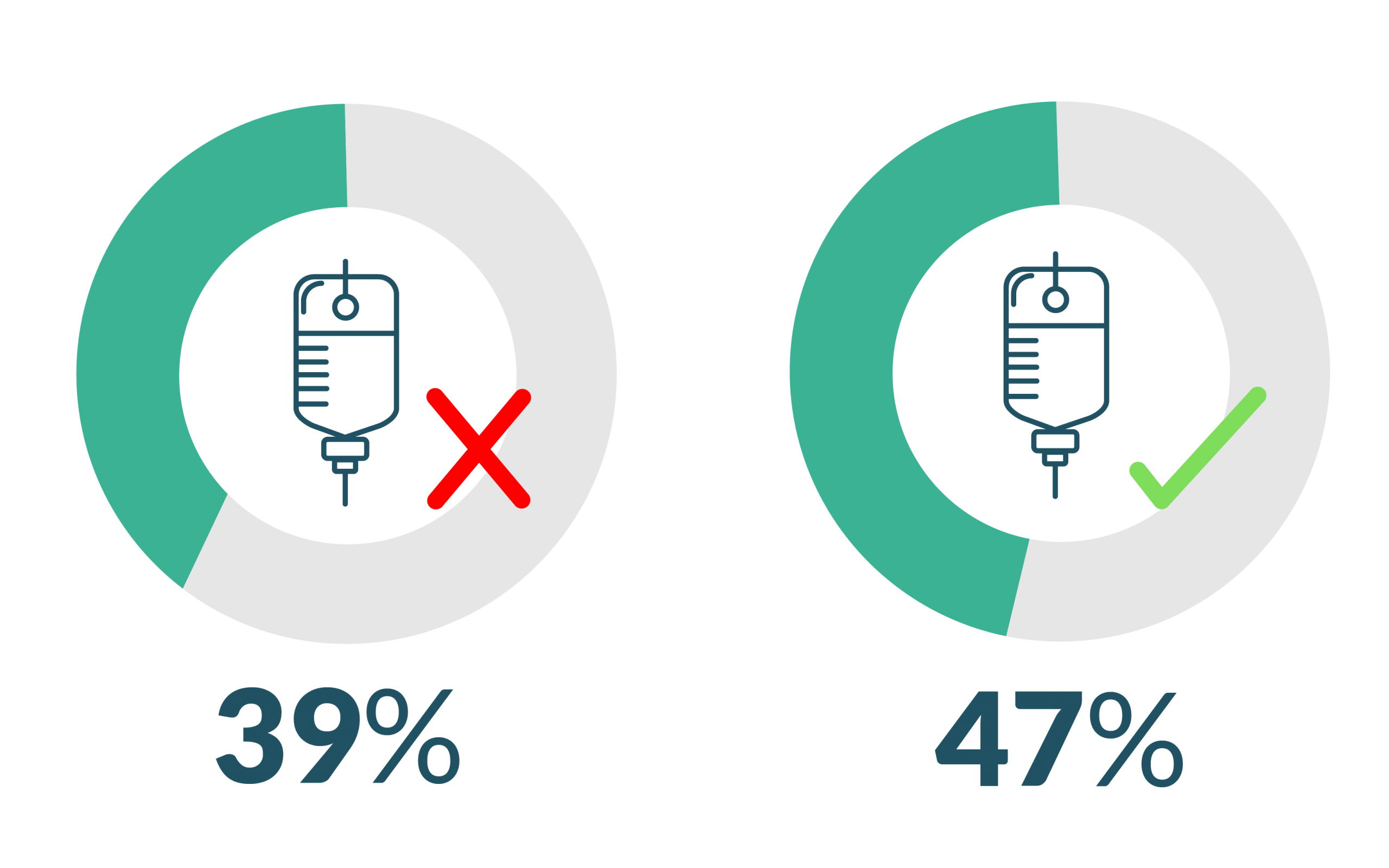 Yet, many people have been able to receive a “durable response” (i.e. a sustained control of the growth and spread of cancer). In recent studies, participants with earlier stages of NSCLC had between 12 percent and 16 percent higher five-year survival rates. In another study of lung cancer participants whose cancer cells contained the protein ERCC1, patients who endured chemo lived an average of 14 months longer. Five years later, 47 percent of those given chemo were still alive, compared to 39 percent of those who underwent observation without chemo. For later-stage NSCLC (such as III), the cure rate has doubled with the administration of chemo prior to other treatments (such as surgery or immunotherapy). However, among all stages of lung cancer, only 15 percent of patients are alive five years after diagnosis.

How Does Chemo Work?

In most cases, lung cancer has spread beyond the chest and has reached other organs, such as the lymph nodes or the brain. As such, chemotherapy is recommended for treatment because, unlike “local” treatments like surgery and radiation which focus efforts on a single area, chemo is a systemic treatment. Systemic treatments can travel throughout the body (usually by the circulatory system), killing cancer cells that have metastasized outside the primary site.

Various chemo medications kill cancer by different mechanisms (with new ways of killing cancer cells continuously being researched). For instance, alkylating agents – often used to make medications like carboplatin and oxaliplatin – kill cancer cells by damaging their DNA and preventing them from making copies. Other lung cancer treatment mediations like pemetrexed, brand name Alimta®, function as antimetabolites that trick cancer cells into accepting the medication as part of their DNA and RNA.

Typically, cancer cells form and grow at a rapid pace – especially when compared to the maturation rate of normally-functioning cells. Nonetheless, chemotherapy can damage normal cells in addition to attacking cancerous ones (though normal cells often recover once treatment has ended). Furthermore, lung cancer tumors change quickly enough to become resistant to certain drugs. Thus, oncologists commonly combine several treatment drugs and therapies. This can include medications from immunotherapy  (like CAR T-cell therapy and other targeted treatments). Combination therapy can require four to six visits for cycles of three to four weeks.

What to Expect From a Treatment Session

Usually, treatment will take place in an outpatient setting at a hospital, clinic, or doctor’s office. Cancer-treating medication is available in the form of a pill, liquid solution, topical lotion, or intravenous (IV) injection or infusion. For most patients, medication is prescribed via an injection (medication delivered over a few minutes) or infusion (medication delivered over an extended period of time). Medication delivered by IV can also be given via a chest port (a device placed in the large blood vessels at the top of the chest). Larger, more durable IVs like central venous catheters (CVCs), central venous access devices (CVADs), and central lines may also be used to administer chemo medication.

Typically, treatment is given in cycles lasting between three and four weeks. Patients should expect to visit their chemotherapy treatment center on the first day of their cycle, a few days in a row, or once a week per cycle.

Side Effects of Chemotherapy

Historically, patients have feared enduring chemotherapy due to its perceived severe side effects. Despite vast improvements in the study and application of cancer treatments, many continue to fear this type of therapy. Nonetheless, when a doctor prescribes chemo as a first-line (or, “gold standard”) treatment, negative symptoms of therapy are outweighed by the benefits of treatment.

Side effects of chemotherapy treatment are dependent on the type of medication, if it’s given in combination with other therapies (such as radiation), the size of the dose administered, and the length of treatment. Yet, symptoms are likely to subside with the end of treatment. Common chemo side effects include:

After receiving a lung cancer diagnosis, a non-smoker may feel confused or afraid and not know what to do next. After all, not all lung cancer is caused by cigarettes. In many cases, it can develop as a result of exposure to hazardous materials that should never have been around in the first place. In this situation, the patient may be sick as a result of corporate negligence, physically and even mentally. There are plenty of support groups and coping resources available that the patient or family members can have access to by doing a little research or asking their doctor.

Ask your doctor to review all possible treatment options. If you have questions about your legal options or filing a claim, fill out a free case evaluation form.