The Rubber Capital of the World

Akron, Ohio served as the nation's "Rubber Capital of the World" for decades, producing more than one-third of America's rubber products. However, the rubber industry's legacy extended beyond its products. Many workers and patrons were negligently exposed to harmful chemicals the rubber industry used.

In the late nineteenth century, Ohio became the leader in rubber production in the United States. Most of the rubber production facilities were located near Akron, Ohio, which people soon came to call the “Rubber Capital of the World.” Some of the most well-known rubber facilities located in Akron included the B.F. Goodrich Company, the Goodyear Tire and Rubber Company, and the Firestone Tire and Rubber Company.

In 1950, over 130 companies manufactured rubber in Ohio, which employed more than eighty-five thousand workers. Akron, Ohio, was the largest rubber producer, but these companies created other deadly products. The tire and rubber industry exposed employees and residents to harmful toxins such as benzene and asbestos. Exposure to these toxins led to the development of several diseases such as lung cancer and ended peoples’ lives too early.

Rubber Capital of the World: History of Deadly Asbestos and Toxic Exposure 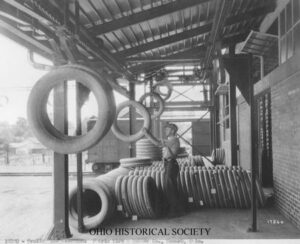 In 1950, Ohio rubber manufacturers produced one-third of the tires and around thirty percent of all other rubber products used in the US. Many dominant rubber manufacturers resided in Akron in 1950, including Goodyear Tires in Akron, Firestone Tire and Rubber Company Headquarters, and B.F. Goodrich. These large-scale companies made and distributed products such as tires, hoses, and balloons. Rubber plants also manufactured silicone rubber parts, rubber hairs on tires,
and many other small products. Employees often combined raw rubber with carbon black, or lamp black, which strengthened tires.

However, soot covered everything in Akron as a result. Factory workers were the primary victims of this soot, but family members were exposed when employees came home with the chemicals on their clothes and bodies. Akron residents and employees soon began experiencing side effects. Many people began with a dry cough and lung pain as a result of toxin exposure. Additionally, the soot filled the air and penetrated the water system, resulting in disease and death throughout the city. This history has fueled Akron being named as “The Rubber Capital of the World”.

In 2010, Cheryl Boley, the executor of the state of Mary and Clayton Adams, took a case to the Ohio Supreme Court against the Goodyear Tire and Rubber Company. The Court determined that the premises owner is not liable for asbestos exposure claims originating on the owner’s property unless the exposure occurred at the owner’s property. This statement set a precedent for occupational diseases and their industries.

Does Rubber Have Harmful Chemicals?

Rubber and crumb rubber alike can be toxic at certain levels of exposure. The products contain heavy metals such as lead and manganese and volatile organic compounds (VOCs) like toluene and polycyclic aromatic hydrocarbons. These chemicals in rubber can cause cancer and other diseases when inhaled or ingested. Many states are starting to ban certain classes of chemicals, but for decades, rubber products have had detrimental effects on people’s health.

Does Rubber Have Asbestos?

Rubber is complex to produce and typically requires extreme heat. As a result, many manufacturers utilized asbestos in their rubber plants as it can resist extremely high temperatures. Rubber was found in insulation, ceiling tiles, and flooring in factories. The industry was aware that asbestos caused several conditions like mesothelioma and asbestosis but continued to utilize the chemical in its plants.  In 1935, rubber workers formed the United Rubber Workers union, which fought for better working conditions for its members and the rubber industry as a whole. Federal regulations emerged in the 1980s that restricted the use of asbestos, and many other chemicals, in the workplace. However, rubber factories exposed workers to asbestos and other toxins for decades further cementing it as the rubber capital.

Crumb rubber is a dangerous type of rubber that you are likely familiar with made from recycled tires. Many playgrounds have switched to using crumb rubber to decrease child injury while playing outdoors. However, crumb rubber can easily break apart, allowing the toxins to break free and contaminate the air. People are more susceptible to airborne toxins and can unknowingly be exposed.

Employees of the rubber industry were exposed to toxins such as asbestos, carbon black, and talc. Exposure to these toxins poses a risk for the development of lung and skin problems such as cancer. Common rubber occupation diseases include mesothelioma, lung cancer, and asbestosis.

Those that served in “The Rubber Capital of the World”, aka Akron’s rubber plants, may have been negligently exposed to harmful toxins. If you are experiencing symptoms of lung cancer or mesothelioma, you should inquire with your medical provider. At Lung Cancer Center, we understand the pains you experienced while in the rubber industry and any concerns you have since experienced. You should not have to worry about toxic exposure, whether in the past or today.

There are resources nationally and in Ohio to help you fight your lung cancer or mesothelioma symptoms. Get in touch with us today to determine your options.

Fill out our form to receive a free case evaluation.